Norwegian fishermen are regularly using Intab temperature recorders when exploring new fishing areas in deep water in the Atlantic as well as in the Barent Sea.
A Tinytag temperature data logger - built into a box made of titan in order to stand the pressure in deep water - was lost from the fishing trawl of M/S Geir at a depth of 1650 meters in the Atlantic, 250 nautical miles West of Ireland.

The captain realized that it must be considered lost for ever.

But amazingly enough, one and half year later he got a phone call from a Norwegian trawler reporting that they had got something in their trawl which they believed belonged to "Geir". Sure enough, the lost recorder had been found. Mr Jan-Erik Steen at Octopus Marine in Trondheim Norway to whom the logger was sent for exploitation explains:

" When I opened the case I found the logger completely intact and functioning as can be seen from the graph. 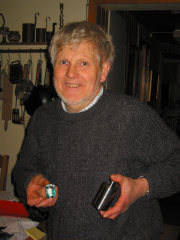 I sent the logger to a certified institution for calibration. After being on the bottom of the Atlantic Ocean for such a long time it was amazing to find that the maximum deviation from correct temperature in the interval -20 degrees to 30 degrees was still well within the specified limits (0.30 degrees). 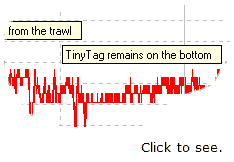 It just shows how reliable and robust these loggers are. Temperature monitoring is extremely important for deep water trawlers as they usually are looking for specific fish arts which only are available within a certain range of the water temperature.

I replaced the battery and sent the logger back to M/S Geir with the following message: "Congratulations, recorded temperatures as well as the logger are both in a perfect condition. Let me know the name of the trawler who find the logger. We have an other lost logger on the bottom of the Barents Sea."